As we know that there are many challenges that people do to break the world record, yes, from the ones that require a lot of energy to the most extreme ones. Usually, weightlifting or bench presses are done at the fitness center, but here is a man who broke the bench press world record in the water, that's what Greg Wittstock from the United States did who managed to set the world record for lifting barbells in the water in September 2019. Right at the bottom of lake ST. Charles Illinois, he bench presses 62 times with a barbell weighing 50 kg, that's really amazing. Previously, this record only stopped at 42 bench presses, but Greg managed to bag a new Guinness World Record. Besides being strong, Greg can also hold his breath for 1 minute 31 seconds in the lake. Well, if you can't do it, it's okay. 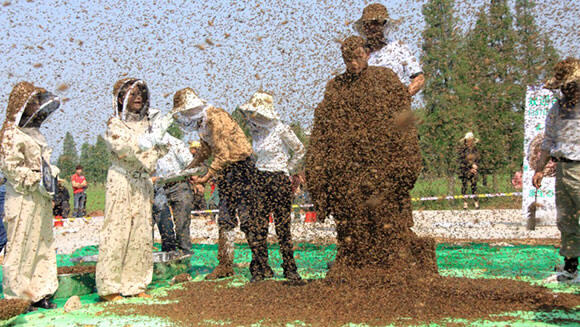 If you get stung by just one bee, you'll feel sick, right, bro, so how does it feel when you're surrounded by hundreds of thousands of bees? Well, this man named Ruan Liangming from China managed to set a world record by being swarmed by bees all over his body, this record-breaking was carried out in Fengxin village, Yichun City, Jiangxi province under the supervision of a jury from the Guinness World Records. This action was assisted by several people to cover his body with bees so that his entire body was completely full of bees, the room was surrounded by bees for 53 minutes 34 seconds with a weight of 63 kg and as many as 637 thousand bees. It's no wonder that Ruan got a world record, but even though he was surrounded by hundreds of thousands of bees, Ruan admitted that he wasn't stung at all, apart from liking bees, keeping his body still is the best attitude when surrounded by bees. The world record this time is even more ridiculous, bro, the man named Oleg Skavych managed to break the national record by pulling a cargo ship weighing 677 tons using his teeth, wow, didn't the teeth fall out. Well this man from Ukraine pulled a cargo ship with a distance of more than 15.8 meters to break a new world record, this achievement surpassed the Guinness World Record previously held by Omar Hanapiev from Russia by using his teeth to tow a 635-ton cargo ship with the distance is only 15.2 meters in 2001 ago. This time, a man named John Evans from England was recorded in the Guinness Book of Records world record on May 24, 1999, as a man who was able to lift a car overhead for 33 seconds. Even though it's only a mini car weighing 160 kg, this attraction is considered very dangerous because it only relies on the strength of the cervical spine, not only that, John can also balance other large objects such as people, books, and many more, really cool.

Living in a barrel This man is also not half-hearted to be able to break the world record, bro, a man in South Africa, namely Vernon Kruger, has lived on a barrel for 2 months to break the world record, and what is even crazier is that the barrel is mounted on a pole with a height of 25 meters. Inside the barrel, he can only sleep in a circle, take a shower twice a day and then there is a small pipe to channel his defecation if the food will be delivered to the barrel by his team using a basket. Despite complaining of back pain and cramps, his efforts were not in vain, he broke the Guinness World Record for the longest person to live in a barrel. 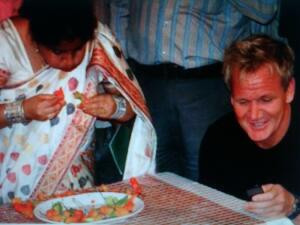 Who here likes spicy food? We have to see, bro, what an Indian woman named Anandita Dutta Tamuly did, she broke the record for putting the most chilies into her eyes, within one minute she could put 25 chilies in, and in a few seconds she could see as usual. What's special is that the chili used is not an ordinary chili but one of the hottest and hottest types of chili in the world, besides that Anandita also eats a very large amount of the chili.

The Most Phenomenal World Records On 2015