Most Beautiful Islands Of Indonesia

Indonesia is the largest archipelago in the world which has around 18,110 islands and 6,000 of the islands are inhabited. It is a country with diverse cultures and geological areas. The population of around 240 million people is derived from 300 ethnic groups that speak over 250 different languages. Foreign visitors are usually familiar with Bali island but there are more islands to explore in Indonesia. Let’s see some amazing tourist destinations on some of the islands in Indonesia.

Lake Toba is located on the island of Sumatra. It is an enormous volcanic lake about 100 kilometers long and 30 kilometers wide. The island was formed by the tremendous volcanic eruption around 75,000 years ago and only a few thousand people survived the catastrophe. It is also the fifth-largest lake in the world.

The above image is of an island in the middle of Lake Toba. It is in the north of the island of Sumatra, Indonesia called the Samosir island. It is the largest volcanic island within an island that contains two lakes. The lake and island were formed after the eruption around 75,000 years ago. Tourist that comes to this island can relax and swim in the volcanically warmed waters.

The Tanjung Putting is a National Park located on the island of Borneo in Central Kalimantan. The Wildlife that lives here are gibbons, macaques, clouded leopards, sun bears, pythons, crocodiles, and orangutans.

There are many local tour companies that offer multi-day boat tours to view the wildlife and going to the research centers. It is unfortunate that this Wildlife park is heavily threatened by illegal logging and forest clearing for agricultural use.

The Baliem Valley is located in the highlands of Western New Guinea. This valley offers a view of how it was to live in the stone-age world. Visitors that come to the Baliem Valley need to come to Wamena which is the starting point of coming to Baliem Valley.

The valley was not known to the outside world until a large aerial flight from Hollandia (now Jayapura) pass the valley and discovered a large agricultural population living in the valley. Nowadays the tourist can visit to see the mountain views, roaring rivers, tribal villages, and meet the warm Dani people.

Mount Bromo is an active volcano situated inside Bromo-Tengger-Semeru National Park, beside Mount Semeru at East Java, Indonesia. It is the most active volcano in the world and some areas are blocked off from visitors due to the unforeseen circumstances of danger. It is also the most hiked mountain and most visited tourist attraction in Java, Indonesia because, after an exhausting hike,the visitors are awarded with the exquisite landscape during sunrise

Bunaken is located in the north of the island of Sulawesi. The island is located in the Bunaken Marine Park. It is one of Indonesia’s most famous snorkeling ad diving areas. There are around 70% of all the fish species that live in the western Pacific ocean passes in Bunaken. Between the months of April and November is the best time for diving and snorkeling. 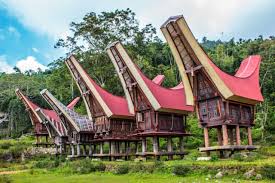 Torajaland is situated in the highland region of South Sulawesi. The people living there are called the Torajan people who are famous for their massive peaked-roof houses known as Tongkonan. When people die in this area, their bodies are kept for several years until the actual funeral ceremony then the deceased is finally buried in a small cave or in a hollow tree.

The most popular tourist destination in Lombok is the Gili islands. It is an archipelago of three small islands: Gili Trawangan, Gili Meno, and Gili Air. The name “Gili islands” simply means small island and there are also other islands around the coast of Lombok that use Gili as their names. The islands are very relaxing and peaceful without any disturbance from any vehicles.

The Komodo dragon is the largest species of lizard that reaches 3 meters and weighs 70 kg found in the Lesser Sunda Island of Indonesia. The park is called The Komodo National Park which is named after the Komodo Dragon. Komodo dragons eat mostly carcasses of dead animals but they are also formidable predators that hunt prey such as birds and mammals. However, attacks against humans are infrequent.

The Borobudur is one of the famous Buddhist temples in the world. Nowadays the Borobudur temple is the most popular time to visit in the northwest of Yogyakarta on the Java island of Indonesia.

It was built over a period of 75 years in the 8th and 9th centuries by the kingdom of Saillendra with two million blocks of stone. The temple was abandoned in the 14th century for the reason that is still unknown until today and lay hidden in the jungle under the layers of volcanic ash for centuries.

Ubud is located among the outstanding terraced rice fields in Bali. There are performances such as dance and music performances every day as well as art galleries and craft shops to visit and explore. It is also known as a great place to learn about the Balinese culture and it takes a short walk or a bicycle ride to go to a quiet place to escape from the crowd and commercialism.